An African migrant takes part in a protest opposite the Knesset. Photograph: Baz Ratner/Reuters Around 10,000 African refugees have taken their protest to the Israeli parliament in Jerusalem on the fourth consecutive day of demonstrations and strikes against 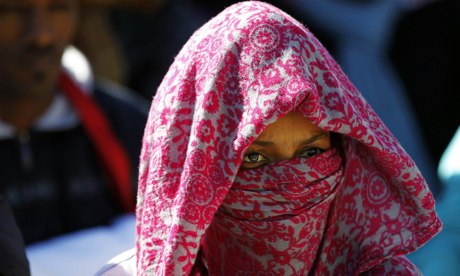 An African migrant takes part in a protest opposite the Knesset. Photograph: Baz Ratner/Reuters

Around 10,000 African refugees have taken their protest to the Israeli parliament in Jerusalem on the fourth consecutive day of demonstrations and strikes against harsh detention laws, and to demand the authorities consider their asylum claims.

The speaker of the Knesset, Israel‘s parliament, refused to allow entry to a delegation to attend a meeting with politicians from leftwing parties. The protesters had been barred “against the backdrop of the tension and general public atmosphere, as well as the fear that granting the infiltrators access will cause provocations in the parliament”, the speaker’s office said.

Eli Yishai, the former interior minister, urged the government “to put every single one of the infiltrators in detention facilities, take their work permits, put them on aeroplanes and send them packing to their countries or a third country”.

Outside parliament, the acclaimed Israeli author David Grossman told protesters: “The idea of Israel contains the idea of refugees, of people who escaped from a terrible destiny to find refuge and shelter.”

He said he felt “embarrassed and ashamed that we have reached this situation. Israel has not created this problem but there is a problem now, and we have to struggle with it and to solve it in the most humane way. You are not criminals: you are normal, ordinary people who are trapped in an abnormal and very extreme situation.”

Tens of thousands of refugees, mostly from Eritrea and Sudan, have been on strike since Sunday, affecting hotels, restaurants and other services in which they are employed, usually without work permits in lowly paid, menial jobs.

About 20,000 took part in a demonstration in Tel Aviv on Sunday and up to 15,000 protested outside the US and European embassies and the offices of the UN refugee agency, the UNHCR, in the city on Monday. More than 100 detained refugees are on hunger strike.

The prime minister, Binyamin Netanyahu, has repeatedly said “infiltrators” from Africa threaten the Jewish character of Israel. “These are not refugees … they are illegal immigrants who have come looking for work,” he said at the weekend.

There are an estimated 53,600 refugees or migrants from Africa in Israel,nearly all of whom entered via Egypt, according to government figures. The flow has been almost completely halted by the construction of a steel fence along Israel’s border with Egypt last year.

Last month, the Israeli government passed a law allowing for “infiltrators” to be compulsorily detained for up to a year. A new “open” centre in the desert has capacity to hold up to 9,000 migrants indefinitely. All are being encouraged to voluntarily return to their countries of origin.

“We have fled persecution, forced military conscription, dictatorship, civil wars and genocide. Instead of being treated as refugees by the government of Israel, we are treated as criminals,” an organisation called Freedom4Refugees said in a statement.

“A range of unprecedented policy changes has caused us to take drastic measures to display our discontent, frustration and fear … We have asked the Israeli government to improve [its] asylum policies, recognise us as refugees and give us our rights accordingly. Instead, with every year that passes, we have been criminalised, met with xenophobia and increasingly dehumanising policies.”

Critics of the government’s policy say Israel has sought to attract hundreds of thousands of foreign workers, mainly from south-east Asia, in recent years to take low-paid jobs such as care workers and agricultural labourers. Migrants and refugees from sub-Saharan Africa could be offered such jobs instead, they say.

Some also suggest Israel should be especially welcoming to refugees, given the history of persecution of the Jews. An editorial in the left-leaning Haaretz newspaper on Wednesday reminded Netanyahu of “the obligations required by Jewish moral values. Netanyahu, who speaks incessantly about the nation-state of the Jewish people, has forgotten what it means to be a Jew.”

• This article was amended on 9 January 2013. A subheading on the earlier version referred to “Somali” where it should have said “Sudanese”.