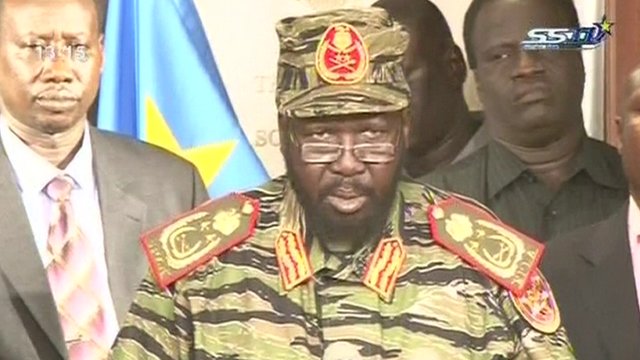 President Salva Kiir: “The government is doing all it can to make sure that citizens are secure and safe”

South Sudan’s President Salva Kiir says an attempted coup by soldiers loyal to his sacked former deputy Riek Machar has been put down.

It comes after heavy gunfire overnight in the capital, Juba.

At a news conference, Mr Kiir said the government was in full control of the capital, and announced a night-time curfew for civilians.

Several people are reported wounded and hundreds of people have sought refuge at the UN mission in Juba.

The UN has expressed concern and appealed for calm. It said it was in touch with the government.

Hilde Johnson, the special representative in the country, said she was “deeply concerned” and urged “all parties in the fighting to cease hostilities immediately and exercise restraint”.

The alleged attempted coup is a manifestation of months of political unrest, which escalated in July when President Salva Kiir dismissed his deputy, Riek Machar. Mr Machar and other senior politicians accused the president of intolerance and dictatorship. In recent weeks, Mr Kiir has warned of attempts to instigate political instability, amid bouts of ethnic violence.

Differences between Mr Kiir and Mr Machar mirror the complex ethnic and political divisions across the poor nation. Mr Kiir, from the majority Dinka ethnic group, and Mr Machar, from the second largest Nuer group, have been at odds in a scramble over the spoils that independence brought on. These divisions extend to the army, which owes allegiance to the politicians.

The instability is exacerbated by the presence of many illegal guns, mostly from years of war with Sudan. Even though the authorities say they have put down the latest unrest, it is clear more challenging days lie ahead for the new state.

“I have been in touch regularly with the key leaders, including at the highest levels to call for calm,” she said.

Mr Riek has not commented and his whereabouts are unclear. But his spokesman said he was safe and denied reports he had been arrested.

Tensions have been high in South Sudan – the world’s youngest country – since President Kiir dismissed his entire cabinet, including his deputy Riek Machar, in July in an apparent power struggle.

The two men are from rival ethnic groups that have clashed in the past.

Mr Kiir is from the Dinka community, the largest in South Sudan, while Mr Machar is from the Nuer, the second-largest. Some Nuer have complained about Dinka political domination.

The fighting in Juba broke out overnight, and intensified in the early morning, with reports of continuous gunfire and several explosions.

The city’s airport has been closed and the state TV channel SSTV went off air for several hours. 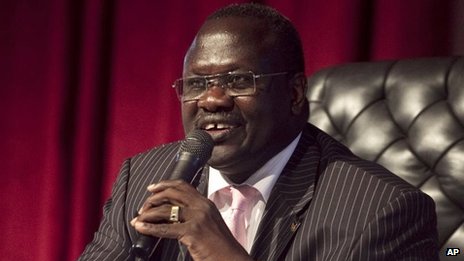 Shortly after it came back on air, SSTV broadcast an address from Mr Kiir, wearing military uniform rather than his usual civilian clothing and flanked by government officials.

He said the violence “was an attempted coup”, but that the government was “in full control of the security situation in Juba” and the attackers being chased down.

The fighting began when unidentified uniformed personnel opened fire at a meeting of SPLM, he said, and was followed by an attack on army headquarters near the university.

They were carried out “by a group of soldiers allied to the former vice-president Dr Riek Machar and his group”, he said

“The security organs will also undertake full investigations into these incidences, and the government will ensure that the culprits answer for their crimes before the appropriate law institution.

“Rest assured that the government is doing all it can to make sure that citizens are secured and safe.”

The SPLM would never allow power to be transferred by force in South Sudan, he said.

Foreign Minister Barnaba Marial Benjamin told the Associated Press that some soldiers had tried to raid the weapons store at the main military based in the capital, but were repulsed.

Juba was reportedly calm by mid-morning, but heavily armed troops were seen on the streets.

Hundreds of people, mainly women and children, have taken shelter at the UN compound near the airport and at a UN house in the city.

“We hope the security situation in Juba will quickly normalise to enable the civilians to return very soon to their residential areas. To that end, UNMISS (the UN mission in South Sudan) calls on all parties to show continued calm and restraint,” the UN said in a statement.

One resident who lives near the presidential guard barracks told the BBC that many people had sought refuge at a Catholic church.

The UN and the US embassy both denied rumours they were harbouring any political or military figures.

In a statement, the US said embassy staff had spoken to a range of officials and concerned parties “in order to urge calm, restraint, and a settling of differences through a peaceful political means rather than through violence”.

South Sudan split from Sudan in 2011, after a referendum intended to end decades of conflict. But the oil-rich country is ethnically and politically divided, with many armed groups active.